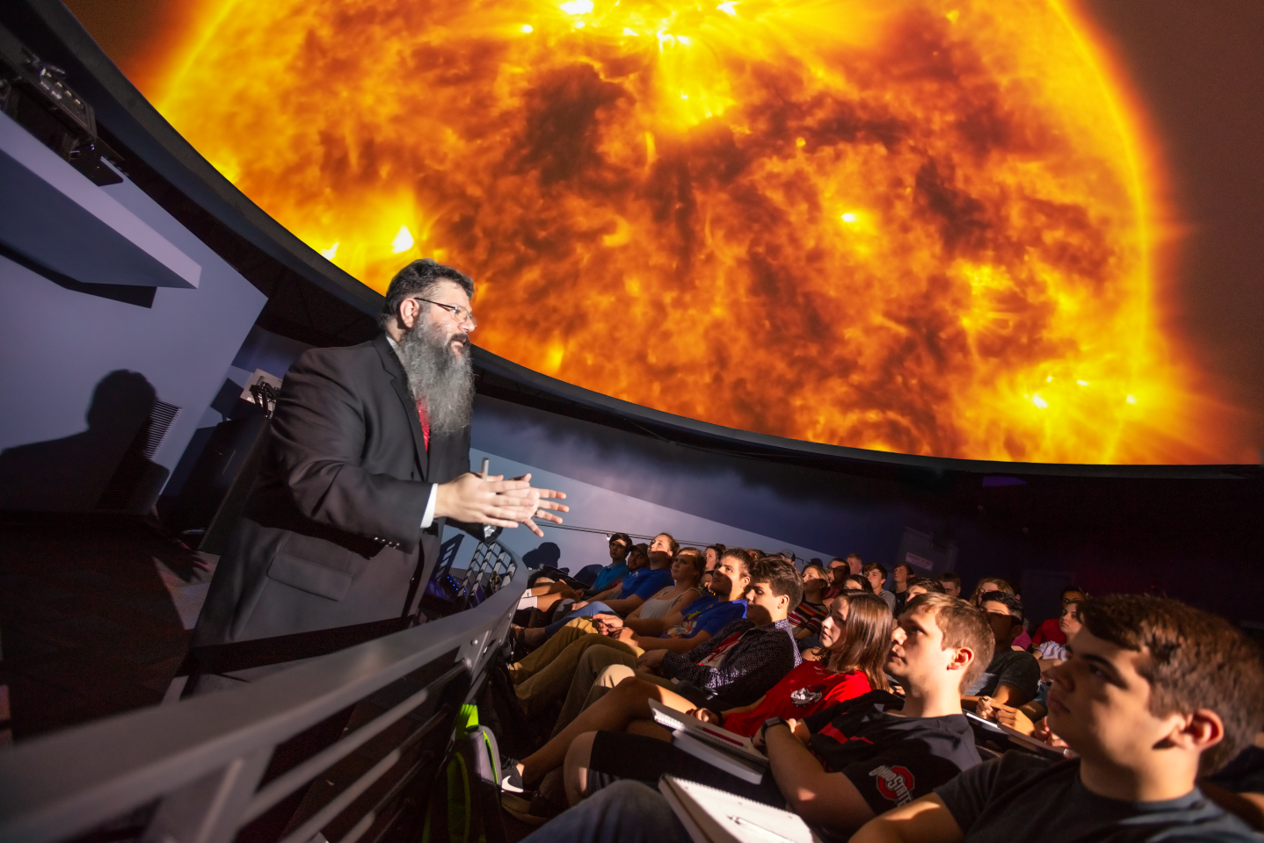 Engaged Scholars is a monthly series highlighting Ohio State faculty who have made an impact in our communities through their community-engaged research and teaching. Photo: Michael Stamatikos gives a lecture at the SciDome in Newark.

My research is in high-energy particle astrophysics featuring Gamma-Ray Bursts, which are cosmological beacons of ephemeral high-energy radiation that herald the death cries of stars, ultimately resulting in one of nature's most enigmatic creations: a black hole. My long-standing strategic collaboration in fast-paced astrophysical research with the National Science Foundations IceCube Observatory and NASAs Swift/Fermi satellite missions has allowed me to participate in some major scientific discoveries, while providing undergraduate students access to vanguard research in science, technology, engineering and mathematics (STEM). This is synergistic with my additional efforts toward improving the professional development of educators, K-16 student success, science advocacy and community engagement.

In June 2018, I spearheaded the opening of the SciDome Planetarium at The Works Museum affording interdisciplinary and comprehensive programming. Serving as OSU Newarks founding director and The Works' first chief science officer, I have used astronomy as a gateway science toward a continuum of lifelong learning, which ultimately has geopolitical and socioeconomic consequences. My mantra is to "teach on all levels" and create authentic STEM experiences that fortify critical reasoning, thus resulting in an educated electorate, in accordance with Ohio State's motto "education for citizenship."

Why is it important to engage the community in your research and teaching?

STEM fields are vital to the national economy, since they provide employment that tends to be better paying, more secure, and is projected to grow at twice the rate of non-STEM jobs from 2019-2029, which exceeds the pace of our current workforce capacity. By 2025, only 40% of STEM jobs will be filled by US citizens. We are a nation whose success was built upon investing in the education of all citizens. This is the mechanism for social mobility that enables realizing the proverbial American Dream. Yet, perhaps unsurprisingly, only 19% of Americans can even name a living scientist.

In academia, STEM faculty are tasked with pushing the horizon of discovery via research, mentoring future scientists, teaching students, facilitating the professional development of (K-12) STEM in-service and pre-service educators, advocating for general scientific literacy and inspiring the next generation of explorers. Most academic institutions put a broad premium on either research or teaching/service. However, I consider these efforts, which are rarely duplicated elsewhere, to be part of our scholarly duty - especially at a large public land-grant university, so I have been deeply committed to these fundamental endeavors concurrently over the last decade at Ohio State.

What led you to the path of engaged scholarship? How did you get started?

As far back as I can remember, I've always loved science in general and space in particular. My interests were fortified by great educational TV programming like: Mr. Wizards World (with Don Herbert) and 3-2-1 Contact (PBS). As well as monolithic science fiction classics like Star Wars: Episode IV A New Hope (1977) and 2001: A Space Odyssey (1968), both of which were timeless vehicles to imaginatively explore my passion for all things space. I would later come to appreciate that such unbridled imagination was critically important for many great achievements in both science and art.

We also lived within walking distance to our local public library, where I spent countless hours using the card catalog to hunt down and read (mostly) science books. One title that immediately comes to mind is Stephen Hawkings classic bestseller A Brief History of Time (1988). That book helped me articulate some of my most fundamental questions, while giving a context for potentially finding the answers. It quickly became clear to me that you need to study physics if you want to understand natural phenomena on a fundamental level.

Incidentally, my love for engagement grew out of my desire to explain what I was learning to my paternal grandmother, who had no formal education and only spoke Greek. As the first person in my family to attend college, I quickly learned how to break down complex concepts into their essential elements. This is an important skill that we unfortunately dont formally teach our fledgling scientists and engineers. So, a big part of what I do these days is really paying that debt forward, by providing similar opportunities for informal STEM education and outreach to anyone interested especially children. I was very fortunate growing up in that I had very supportive parents, resources and seminal experiences that encouraged me to follow and realize my dreams, such as working for NASA. If I can help do that for at least one another person, then that would be a life well lived.

How has your scholarship benefited from engaging with community partners?

The marquee benefit has been the realization of the SciDome: a $2.1 million, multi-sensory, immersive 4K digital theater environment affording an interdisciplinary and comprehensive STEM experience. The Newark Advocate ranked the SciDomes opening among the top 10 stories of 2017. Explore Licking County gave SciDome the Collaboration of the Year IMPACT award in 2017, for the unique public-private partnership between OSU Newark and The Works Museum, which services 165 schools in 16 counties and annually accrues 60,000/10,000 visitors/students (pre-Covid statistics). This longstanding close partnership, which was recognized with the Excellence in Community Partnership Award in 2016 by Ohio State's Office of Outreach and Engagement, has enabled special events, such as the Great American Solar Eclipse Viewing Party (2017) and the 50th Anniversary of Apollo 11s lunar landing (2019), that expand community engagement in local under-served rural communities and underrepresented Appalachian populations. These efforts resulted in an OSU Newark Faculty Service Award in 2017 and being named a Community Engaged Scholar by the Office of Outreach and Engagement in 2021.

Since June 2018, I have served as the OSUN Founding Director of the SciDome and The Works' first Chief Science Officer. As a modern-day Lyceum, the SciDome enables systematic access to informal science education beyond the classroom as a venue for our comprehensive (K-Infinity") programming, by serving as: (i) a full dome theater for museum patrons, (ii) an academic classroom for OSU Newark and local K-12 students, (iii) an immersive, interdisciplinary environment for public engagement/adult continuing education, and (iv) a hub for extended professional development of local STEM educators via pedagogical workshops for standards-aligned, field-tested curriculum development.

The SciDome provides access to OSU Newark by embedding courses, programs, research, and service to many southern and eastern Ohio communities. This sustained community engagement has tremendously enhanced appreciation for the campus and has boosted individual benefactors interest and confidence in OSU Newark, leading to the procurement of substantial private funding toward the SciDome a new $32M OSU Newark campus facility - the John and Mary Alford Center for Science and Technology, which recently opened.

What has been a highlight of your community engagement experience?

Through my work with NASA, I'm lucky enough to get to share my passion about the Cosmos with students and the public. A natural connection to science is formative in children since empirical inquiry strongly aligns with their inherent curiosity. Since you cannot teach passion or curiosity, you must find a means to resonate inherent wonder. Children hold the promise of our legacy as living metaphors that allow us to touch and perhaps shape the future. Seeing a big smile from someone safely observing the Sun for the first time never gets old - especially upon a child's face.

In that regard, the SciDome offers a high return on investment in human capital, by attracting young people to STEM careers and developing their critical reasoning skills, which can later help solve major socio-economic and geopolitical challenges. An educated, innovative and motivated workforce is a precious domestic resource that must be cultivated. Since astronomy enjoys broad public appeal as an accessible science, it plays a key role in K-16 STEM education (for both students, pre-service and in-service teachers) while encouraging science literacy in the general population - especially in adult continued education.

A large part of my scholarship is connected to sharing research with the public. I really get a kick out of helping others see the beauty of nature and our everlasting struggle to understand phenomena ranging from sub-atomic processes all the way up through and including the entire Cosmos. Its incredibly invigorating to discover something new, i.e., to be the first to know something. I've been lucky to have been a part of a few remarkable scientific discoveries over the years and have worked with many students and educators on all academic levels. The look of genuine understanding that flashes in a students eyes and the eureka moment of scientific discovery both get me euphoric.

What advice would you give to faculty and students who are interested in engaging the community in their scholarship?

Passion can be infectious and engendered seminal teachable moments today can lead to unforeseen dividends and/or opportunities in the future. Ohio States land-grant mission assures university access to any student who can attain the preparation and skills needed to succeed at Ohio State. Therefore, interdisciplinary scholarship engagement and related synergistic activities have a multiplying effect that extends Ohio State's land-grant mission of educating Ohioans well beyond the classroom, where most learning occurs, by embedding these resources in the community.

Lets Go to Outer Space, with the Columbus Symphony Orchestra (2017), Live audience of 2,500 at the Ohio Theater.

The Great American Solar Eclipse Viewing Party (2017), Live audience of 200 at The Works.

Our mantra: "teach on all levels" has resulted in the SciDomes K-Infinity programming: