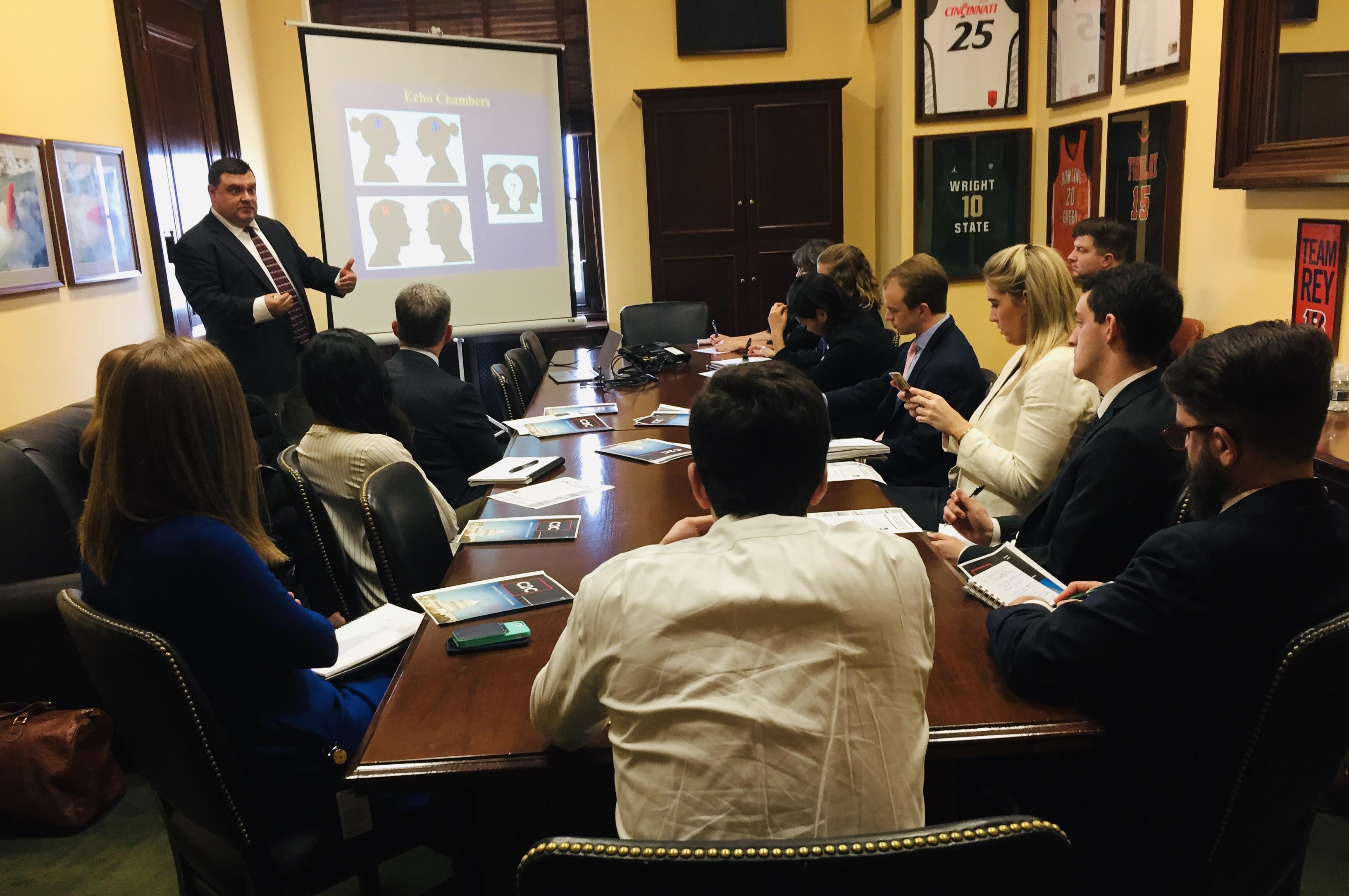 Engaged Scholars is a monthly series highlighting Ohio State faculty who have made an impact in our communities through their community-engaged research and teaching. Photo: Michael Neblo (standing) presents in Washington, D.C.

Michael Neblo
Professor of Political Science and (by courtesy) Philosophy, Communication, and Public Affairs, and Director of the Institute for Democratic Engagement and Accountability (IDEA)
College of Arts and Sciences/Social and Behavioral Sciences/Political Science

My work seeks to amplify the voices of people who are usually not heard and heeded in representative democracy. We developed "Deliberative Town Halls" (DTHs) to bring together community members with their elected officials to deliberate about pending policy. So the communities here are political jurisdictions - mostly U.S. Congressional districts, but also state and local, and even some elsewhere, like Australia. We engage these communities by creating opportunities to identify issues that matter most to them, and then to interact meaningfully with each other and elected officials about those issues. The scholarship ranges widely, but we're especially interested in who engages this way, what they say in these events, and lasting effects on participants (e.g., future political participation) or officials (e.g., changes in how they represent those constituents or handle that issue). We recruit widely, making extra efforts to reach those who are often marginalized. Doing so improves the policy process by incorporating more lived and local experience into decision-making; it improves equity by reaching people who do not have the resources to make their voices heard; and it improves legitimacy by more tightly linking policy to the people who will have to live under it.

Why is it important to engage the community in your research and teaching?
Our political culture is a mess, which, in turn, warps policymaking. The way to better politics and policy, though, is not through concentrating yet more power in experts. Rather, the missing piece is consulting with citizens about their role in representative democracy, and supporting them in playing that role more effectively. Doing so, in turn, gives elected officials better incentives to play their role more effectively. The public needs support evaluating reliable information, developing skills to deliberate across difference, and consolidating their commitment to democratic values, institutions and practices. Communities across the country need opportunities to learn and practice these skills, but just as importantly, they need to see that when they put in that effort, it makes a difference i.e., that public officials respond. That's what we aim at - supporting community members in a positive, deliberative process engaging with each other and their elected officials, supporting those officials in using that information for policymaking, and reporting the impact of their engagement back to community members and other scholars. Our teaching goals are part of that larger project - to prepare newly enfranchised student-citizens along these lines. In other words, to advance the mission announced in OSU's motto, "Education for Citizenship."

What led you to the path of engaged scholarship? How did you get started?
I'm first generation college. My dad was a truck driver and mom a cashier. Their fathers had six years of schooling between them (and that includes one of them going through the sixth grade). Yet all of them voted dutifully and discussed political issues with relatives, friends, neighbors, and co-workers. Even without much (or any) formal schooling, they thought they had things to say about politics that others should hear, and vice versa. Growing up, I took all of this for granted. Then in graduate school, I learned that the prevailing opinion among political scientists was that most citizens did not (and did not really want to) deliberate much about politics, that modern democracies had grown too large for what little deliberation there was among the mass public to be effectual, and moreover that was probably a good thing since such deliberations proceeded on the basis of appalling ignorance and a questionable commitment to constitutional principles. This jarring combination of experiences created cognitive dissonance and a deep practical tension for me. A big part of why I got started with community engaged scholarship was to try to resolve this intellectual dissonance and practical tension.

How has your scholarship benefited from engaging with community partners?
My scholarship is about community engagement in politics. So it has benefited in myriad ways from engagement about engagement. Two stand out: First, most political science has tried to indirectly infer why people participate (or don't) in politics, rather than directly asking and observing them in novel but relevant contexts. So the simplest but most important benefit to community engagement has been learning new things about people's reasons for participating (or not). One of the most important new findings is that low political engagement is often more about frustration than apathy; many people don't engage not because they don't care, but because they don't believe elected officials will listen to and heed them. When you give them reasons to think that officials will listen to and heed them, more (and more diverse groups of) people participate. And when they do, over 95% consider DTHs "very important for democracy" and say they would like to do another. The second benefit follows directly from the first: members of Congress want to collaborate with us precisely because of constituents' extremely positive attitudes about these events. So public engagement is essential to both our scholarly and practical goals.

What has been a highlight of your community engagement experience?
Two come to mind: We ask DTH participants to give us open ended feedback on the events. When we got our first set of such comments back, I was not sure what to expect. Reading through them was a real highlight of my community engaged research. One wrote, "This was a great forum. It actually made me feel like I had a voice in government," while another said, "I believe we are experiencing the one way our elected representatives can hear our voice and do what we want." Comments like these just kept coming, with six positive statements for every negative one. I've been invited twice to testify before Congress about this work and I was also able to present on it at an orientation for incoming members of Congress. A number of them decided to try our method after hearing this testimony, including some who later reported that it definitely affected their decision making about pending legislation. Hearing that elected officials were actually listening to and responding to these new community voices was the other highlight of this work for me.

What advice would you give to faculty and students who are interested in engaging the community in their scholarship?
There are many forms of engaged scholarship. So the first piece of advice is to find the mode best suited to meeting both your community partners' goals and your own: Do you need to embed deeply in a specific community before even formulating your research questions? Or (like me) do you need to move between many communities more briefly? Second, address problems you care about at a personal level. Some people worry doing so will cloud their scholarly judgment. I suspect such concerns are typically overstated, especially when balanced against the energy and commitment you will bring to projects that genuinely matter to you (never mind enjoying your work more). Next, find people in the community tackling (or who want to tackle) these problems practically. Exchange ideas about how those practical efforts and experiences can inform your research, and vice versa. But listen first; only then explain the research ideas you walked in with or those sparked by what they have said. Put differently, approach your community partners with intellectual humility, not just general respect. Presume you can learn from them in ways that go beyond merely treating them as research subjects and regarding your conversations as just data gathering.

Book: Politics with the People: Building a Directly Representative Democracy, 2018.

Text: Written Testimony Submitted to the Select Committee on the Modernization of Congress (2019).

Video: Testimony Before the Select Committee on the Modernization of Congress: June 5th, 2019.

Article: Deliberative Engagement with VA Patients Regarding HIPAA, Privacy, and the Benefits of Medical Research (2006).