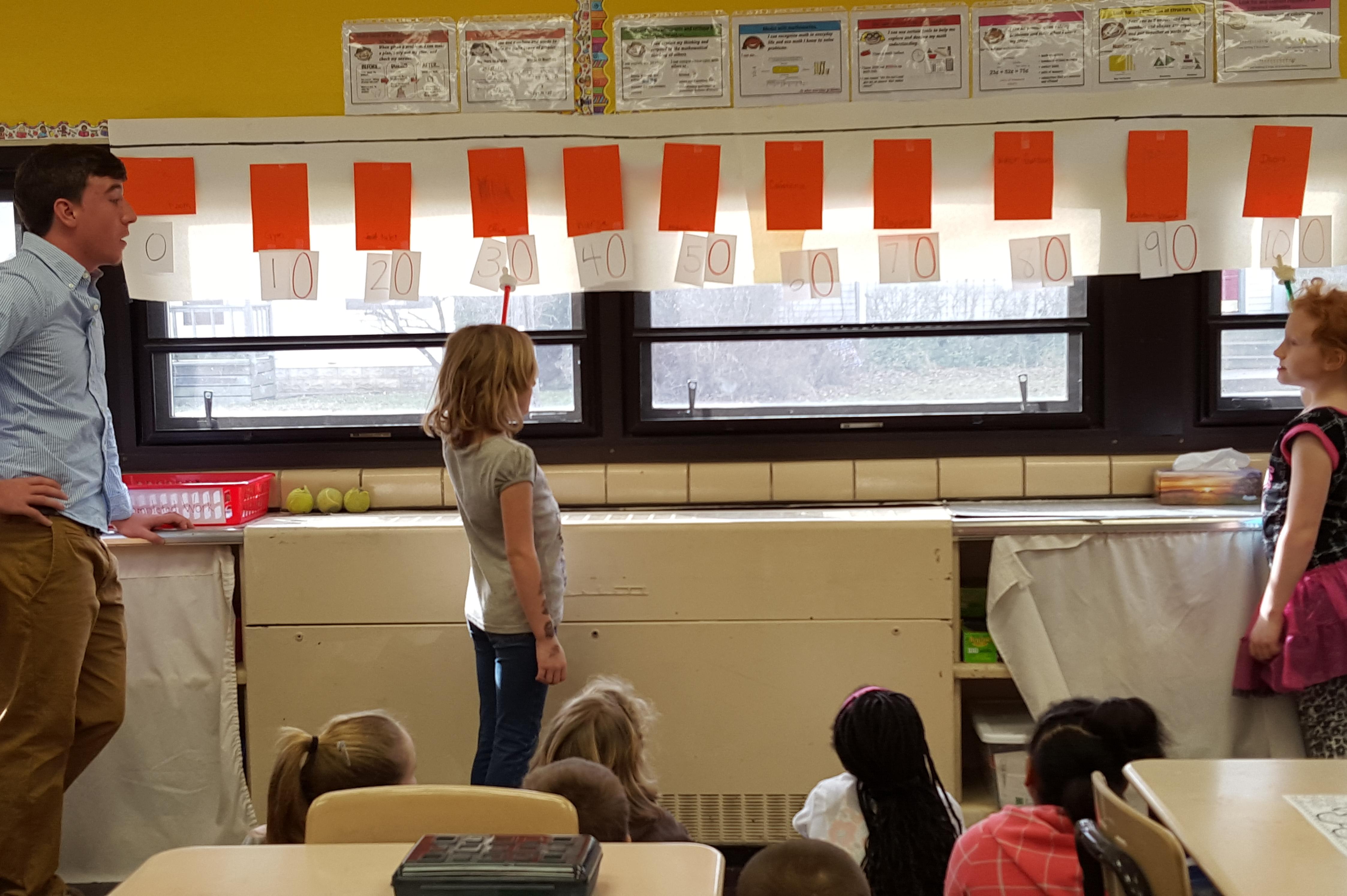 A math teacher and students

By Ben Lewis, Director of Communications

When you think of math being taught in a classroom, your first thought might be of a teacher standing in front of a class lecturing students. Ohio State's Math Literacy Initiative is changing that concept by empowering students and teachers to create shared experiences together and take co-ownership of learning outcomes.

Using a five-step curricular process originating from the Algebra Project, the Math Literacy Initiative focuses on instructional strategies, content knowledge and classroom culture. It starts with a shared experience such as a task, game, or problem-solving activity that every student does, so they are all on the same page and starting from the same point. Students then draw a picture of the shared experience and use their own words to describe it. The teacher only comes in at step four to bring out more formal math ideas and help students show their knowledge using symbols.

"The process changes how teachers teach, but also students' role in the classroom and acquiring knowledge for themselves," said Terri Bucci, associate professor of Math Education and co-director of the OSU Mathematics Literacy Initiative. "It shifts them from just a receiver of knowledge into a creator of knowledge, so they see themselves as mathematicians."

The shared planning and design also extends to teacher professional development and the partner school districts.

"The power share is not just with teachers and their students in the classroom, it is also with the teachers and Ohio State faculty leading the professional development program," Bucci said. "So we set the stage and then teachers design their own shared experience that will work for their classroom and grade level."

Teachers enter the program through a summer course that is tied to their school district's math camp, allowing them to see what it looks like with students from their own district before the school year starts.

"We wanted to have a true demonstration of how it looks with the students from their home district," Bucci said.

Teachers typically stay in the professional development program for three years with some progressing to become a math teacher leader in their building in the fourth year.

Ohio State students who are pre-service teachers on the Mansfield Campus are the teachers for the math camp in the summer, giving them a chance to both practice their trade in the summer with kids and get some visibility with the districts in the region.

"Often times we have students who are hired because someone in the building saw them teach at math camp," Bucci said.

The initiative started in Mansfield in 2008-09 in partnership with Mansfield City Schools, whose high school and middle school were one of four settings for the Algebra Project from a National Science Foundation grant. It was originally targeted to bottom quartile students and was so successful that the superintendent asked to expand the program to elementary schools. The Math Literacy Initiative was one of the first programs in the country to bring the Algebra Project model to elementary schools.

"Nationally, we've become a K-6 site for Algebra Project," Bucci says. "So if districts around the country call in to the Algebra Project office to see what this looks like in an elementary setting, they will almost always contact us."

"Its exciting to get elementary school teachers excited about math," she adds.

The initiative has grown beyond Mansfield as Bucci and the team have now worked with nine school districts in Ohio, a charter school in Brooklyn, New York, and schools in Flint, Michigan.