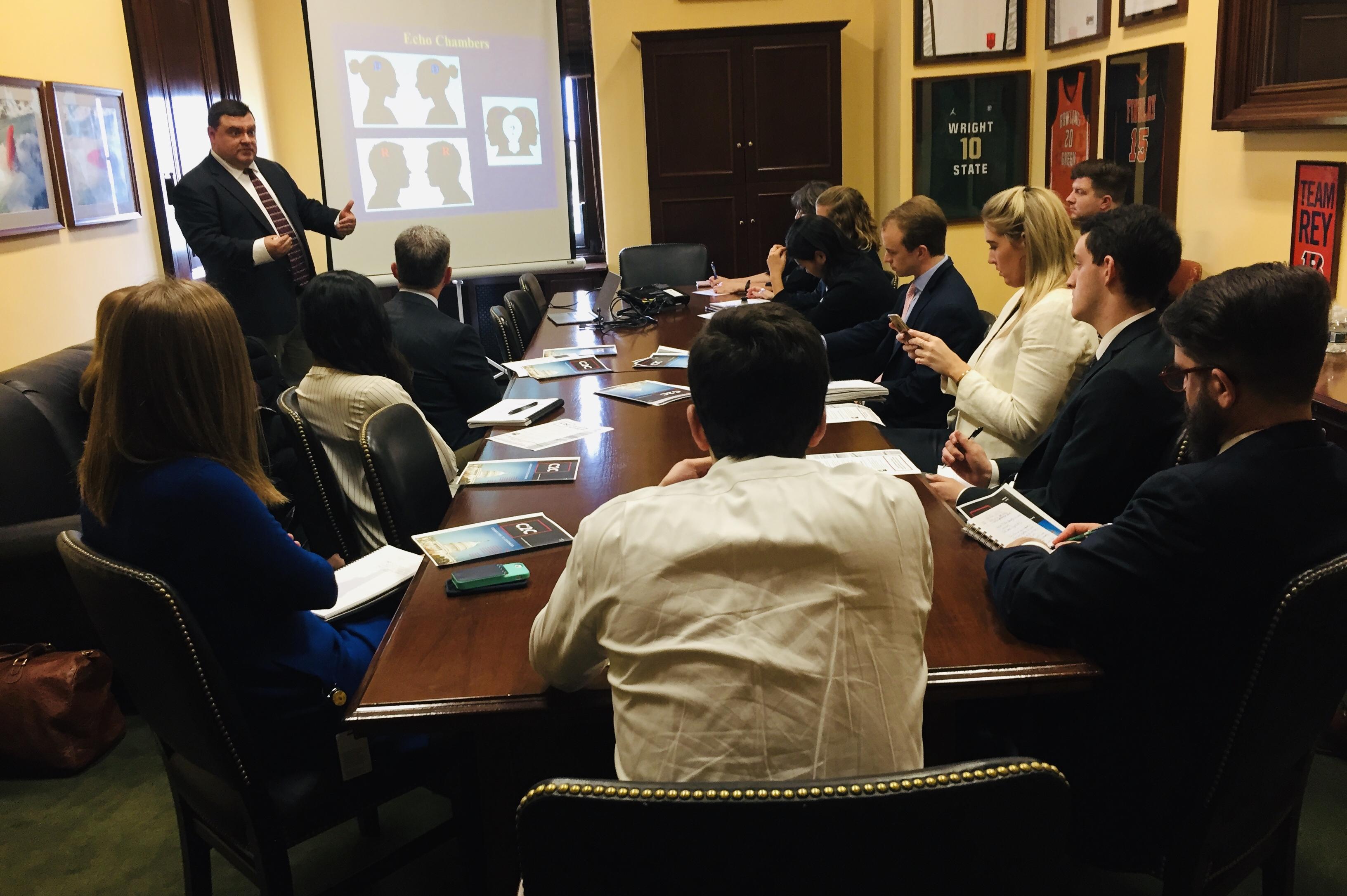 Expanding democracy studies at Ohio State from being primarily faculty-oriented toward more student and community engagement was the idea behind the Institute for Democratic Engagement and Accountability (IDEA). When IDEA's director, Michael Neblo, rebranded the program in 2017, he knew he wanted its mission to relate to three main areas: generating and disseminating knowledge about American political institutions; creating dialogue and deliberation; and enhancing the education of citizens.

"To take seriously the motto and mission of this university is to provide an education that prepares people to become responsible productive citizens and to bring in a whole student oriented dimension to it," says Neblo, professor of Political Science, Philosophy and Public Policy.

Neblo is really focusing on growing this program through the students. IDEA has partnered with the Glenn College of Public Affairs to have some of their students become moderators for their online forums. First-year students can also get involved through the First Year Experience program by participating in one of the deliberative programs, focusing on topics such as immigration and the opioid crisis.

IDEA led an in-person forum to discuss the opioid epidemic in spring 2018. With more than 100 students and faculty present, this engagement put a real-life lens over the scholarly information. Based on this pilot, the IDEA team then led a statewide series of online forums on the issue with residents of every county in the state.

"Part of what we were doing there was trying to mobilize the resources of the university, both in the scholarly sense, drawing on faculty from communication, public health, law, and the Glenn College that are interested in these sorts of issues, and getting the cross-fertilization that is sometimes hard to get when everyone's off doing their own disciplinary things," Neblo explains.

Neblo stresses the importance of these partnerships and engaging people from different departments in their projects. Just a few of the many examples of IDEA's past partnerships include the Center for Historical Research to co-sponsor a series on the state of democracy around the world, the Center for Ethics and Human Values to do a mini-series with them, and the Mortiz College of Law for a talk on technology and electrical security. The program also goes to international levels with Neblo taking a trip to Australia to meet with their parliament, which is interested in adopting some of the program's ideas.

IDEA utilizes their great resources and connections at Ohio State to accomplish one of their main goals: connecting to congress.

"Connecting to Congress is one of the largest, most intensive programs that we're doing right now, and we think that this is bringing dialogue and deliberation in a very useful and hopefully very impactful way," illustrates Amy Lee, associate director of IDEA.

Connecting to Congress utilizes citizen to citizen forums and deliberative online town halls to provide open discussions and relationship building with elected officials. Neblo and Lee hope that this program will someday be a new form of interaction between congress and its constituents.

Looking at the future, Lee says, "I would love for us to be able to provide some proof of impact of some of the positive effects that this has had on participating members of Congress and representational behavior. I think that would only help to convince more citizens of the meaningfulness of this way of participating in politics, which could help it to grow even more."

IDEA is striving for increasing community engagement and having a positive impact on Ohio State, its students, and the surrounding communities. Neblo explains, "We are doing it for the public good. We just want to help congress do their jobs better and get students to help do so."