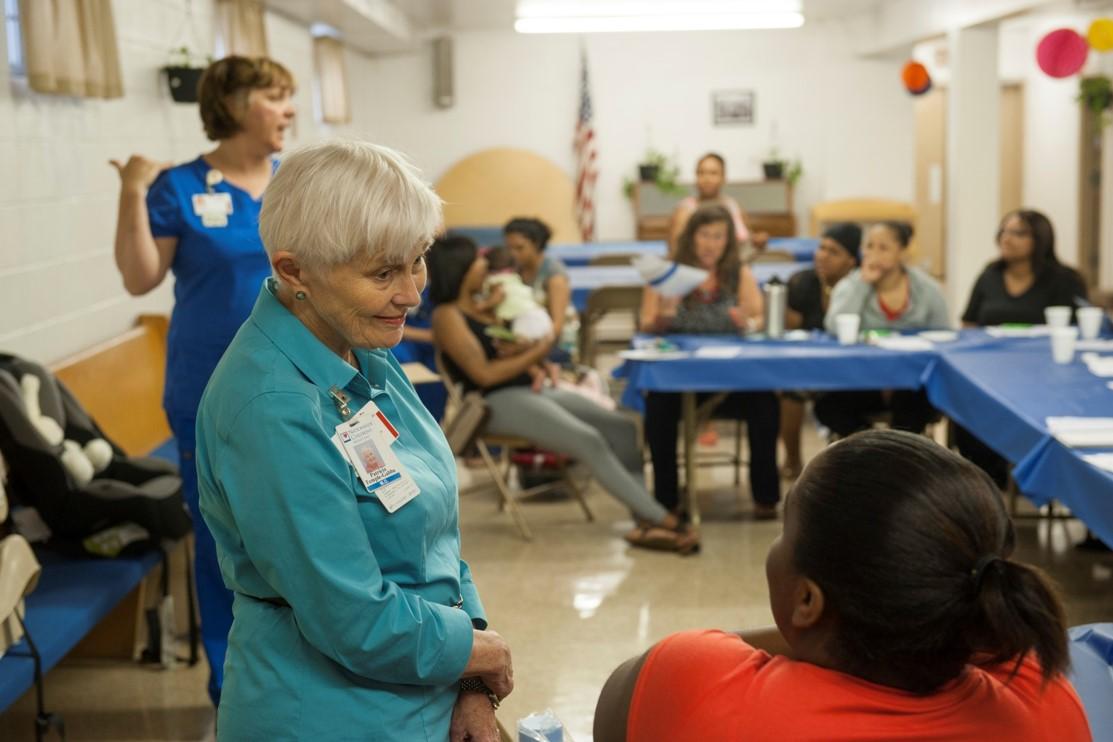 Engaged Scholars is a monthly series highlighting Ohio State faculty who have made an impact in our communities through their community-engaged research and teaching. Note: the above photo was taken prior to the pandemic.

In 2010, motivated by her participation in a statewide leadership group studying why Ohio and Columbus had one of the highest infant mortality rates, and supported by a $48,000 grant from Ohio State, Dr. Pat Gabbe, clinical professor in the College of Medicine, founded Moms2B. This innovative community-based pregnancy program for low-income women was designed to learn from the women and to improve the health status of at-risk communities, empower pregnant women to deliver full-term healthy babies, reduce infant mortality, and eliminate racial and economic disparities in infant mortality between non-Hispanic White and non-Hispanic Black babies. With Dr. Gabbe's leadership and through engagement with the community and the university, it has accomplished these goals. A recent in-depth statistical analysis of the program's outcomes for 675 pregnant women attending Moms2B from 2011-2017 has demonstrated a reduction in infant mortality, improved birth outcomes and reduced disparities.

Moms2B began in Weinland Park at the Grace Missionary Baptist Church in September, 2010 with just two moms. Today, Moms2B holds weekly two-hour sessions in eight sites, each identified as having the highest rates of infant mortality in Columbus. Six sites are churches, while the other two are hospital campuses, Mt. Carmel West in Franklinton and Ohio State University East Hospital.

The program has enrolled 2,600 pregnant women. Over 120 women attend each week, as well as their children and partners through the Dads2B program. Each two-hour Moms2B session includes a structured curriculum developed by the Moms2B team based on the needs of the moms to address their social determinants of health.

Since its creation, Moms2B, has included in its mission to "inspire future health care providers to serve with respect and empathy." As a direct result of Dr. Gabbe's leadership, Moms2B has been actively engaged in teaching and research. Students from the Colleges of Medicine, Nursing, Pharmacy, Optometry, Public Health, Dentistry, Social Work and Ohio State undergraduates have participated in Moms2B sessions and research projects.